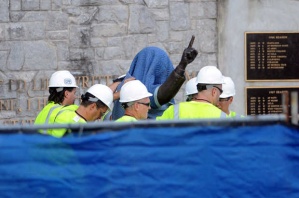 The JoePa statue came down today – but at least six months too late…minimum.  JoePa’s reputation was already in the gutter, next to the remnants of Tara Reid’s career.  I don’t know about you, but I will always remember him as one monster who protected another.  His football success is meaningless, everything he did for Penn State ultimately no longer matters because what he ACTUALLY did was drag the school into the worst/largest/unspeakable scandal in sports history by way of protecting a known child rapist.  Way to keep that legacy alive, JoePa.

I don’t give a shit that he funded the library or anything else that he did that could be considered remotely positive.  He allowed a predator to roam free on campus for 13 years and ruin countless lives because he decided football and his legacy were more important.  I only wish he lived to see the legacy he worked so hard to protect completely ruined.  Ironic, isn’t it?

The theater shootings in Aurora are still resonating rather loudly – as they should be.  Innocent lives cut short for no apparent reason.  The victim’s families have asked that we remember their names rather than the suspect’s.  To be completely honest, I have no idea what his name is, nor do I care, unless it becomes part of a headline that reads “(NAME) Locked in 6×8 Prison Sell With Jerry Sandusky, a Machete, and a Pair of Pliers.  Have at it, Darwin!”  Is that headline too long?  I really don’t care.

Which brings me to things that don’t matter – the Bachelorette (fake), all installments of the Real Housewives (if I wanted to see bitches screaming at each other, I’d just go to Durkins), Jerseylicious (achieves the rare feat of being trashier than Jersey Shore)…why do things like this exist?

I mean, sure, stick me on a tropical island, all expenses paid with 25 dudes and I’ll fall in love too.  So yes, I somehow jumped from JoePa to why I don’t want to read live Tweets of the Bachelorette season finale because again – WHO CARES?  So may bigger things going on than trash reality TV.  My TV is off this evening.