So, off we went to the eastern Caribbean, via Carnival.

The cruise was Saturday-Saturday with stops in the Bahamas, St. Thomas, Puerto Rico, and Turks & Caicos.

Because we were both broke, and the cruise price did not include liquor, we decided to institute a strict “no day drinking” rule.  This is day one: 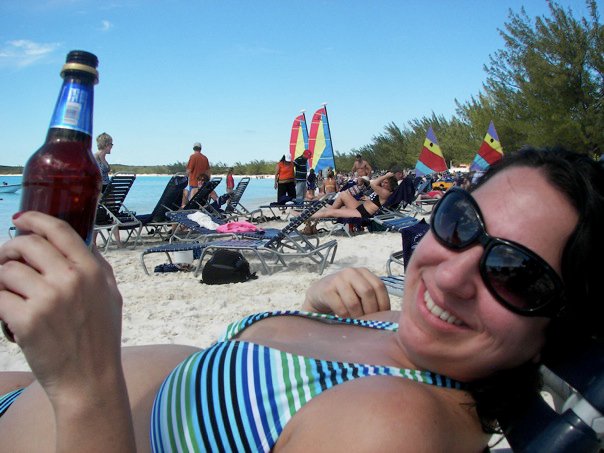 Ahhh look at the pretty color of the water.  Writing this blog is making me want to go back, stat!

Each morning, a schedule of events was slipped under our cabin door.  On Sunday, we decided that after hitting the beach in the Bahamas for a while, we’d go to sports trivia, where surely they would ask about the 1985 Final Four, the 2003 Fiesta Bowl, and Wide Right 17, or whatever, and I would stun dozens of hot men with my sports knowledge.

It didn’t EXACTLY go as planned.  I don’t remember what they asked, but I do know after most of the questions I would look at Lisa and shrug, “I dunno.”

After trivia ended, a random dude and his family asked if they could sit in our booth with us.  It turned out the dude (henceforth know as Stage 5 Clinger) was single and around our age, so after chatting for awhile, we told him our plan was to hit up karaoke that evening, and if he wanted to meet us, he was more than welcome to.

Well, show up he did, and by the end of the night, it was quite clear that he was going to be a total cling-on.  He was already draping his arm around me, rubbing my back, etc, and I was really not feelin’ it at all, you feel me?

During karaoke, the man running it kept reminding us that on the last night of the cruise, the guests would perform in a musical legends show and auditions for each legend were going on through Wednesday.

Sunday night, when we were there, they found an Elton John, Aretha Franklin and maybe Garth Brooks.  But no one wanted to audition to be Britney Spears.  Mr. Man was literally begging someone to audition.

Stage 5 starts rubbing my back and whispering, “I think you should do it, you should do it, you would be great at it, etc”  (you know because I look so much like her and have an amazing voi…oh, wait) to the point where I jumped up and screamed, “I will do it” just to get him to stop touching me.  Since no one else wanted to audition, I “won” by default, to perform as Britney the last night of the cruise.

By Monday night, I was done with Stage 5.  Monday was an at sea day so we were stranded on the boat and I found him wandering around looking for me.  He was a perfectly nice person, just way too into me after less than 24 hours, and the chemistry just definitely was not there.  And I had to be Britney Spears as a result.

Lisa was kind enough to take a video of it – the link is below.  It’s on Facebook and I haven’t figured out how to embed it.

Hitting it one more time

If you were unable to view that gem, I will leave you with this picture (Lisa & I w/the couple we met who also lived in Chicago, Myra and Archie.  They were totally awesome): 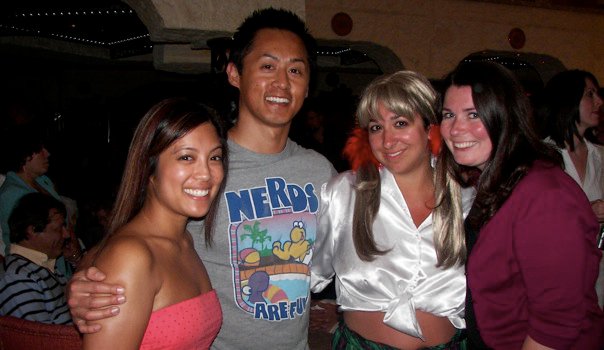 I guess the lesson learned here is that two minutes of humiliation created a hilarious story to talk about.