When I lived in my old apartment at 2020 N Hell, we often threw epic parties.  It started with “Fall into Fall ’07”, which was such a success that we also created Spring into Spring the next two years, in addition to at least two more Fall into Falls.

Here is a glimpse of what our fridge looked like before one of our parties: 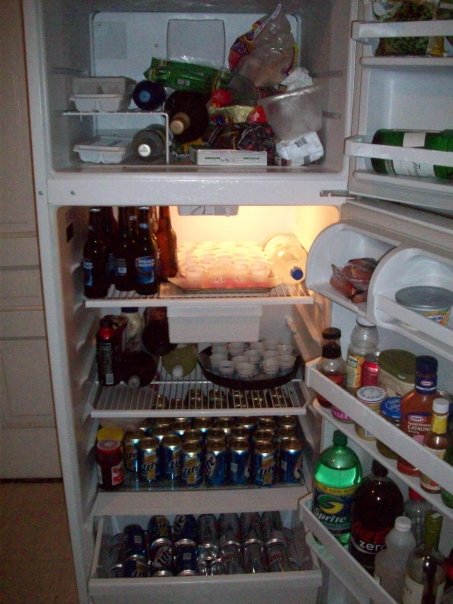 Who needs food when you can just serve jello shots??

Out of all of our parties, my personal favorite, by far, was Spring into Spring, 2009.  While we didn’t throw it until the last weekend of May, that’s still spring, technically speaking.

That was the first, last, and only time John Doe was at my apartment.  I guilted him into showing up because it was my psuedo birthday celebration (not that he knew when my birthday was.  I had to remind him).

He didn’t get there until around 2 am, and showed up with his friend Harold, who none of my friends could stand.  Actually, none of them could stand John Doe either, but they tolerated him through gritted teeth because they knew it was important to me and they’re amazing.

The party was still going strong when they got there – so much so that as I let them in, JD pointed out that someone had puked on our stairs on their way out of the party.  Gross.  (We never did figure out who the culprit was and Steph earned a mega gold star for attempting to clean it up since our landlord would have taken weeks to do it, if he even did.)

At one point, I was sitting on his lap when he looks at me and says, “that’s an interesting dress.”

With about eight gallons of liquid courage in me, I responded, “John, why can’t you just tell me I’m pretty?”  He said something along the lines of, “I assume you knew I thought that.”  Well when you NEVER compliment me, no, I don’t.

Anyway, I decided to put on his Red Sox hat with my “interesting” dress, the result of which is the below:

As you can see, there is nothing whatsoever interesting about this dress.  It’s just plain and black.

I can’t remember if this was taken before or after Courtney pulled me off his lap and dragged me into the kitchen to yell at me.  Good times.