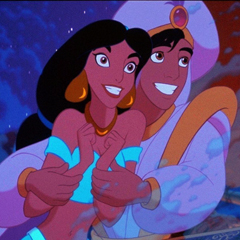 So, last night I was watching Aladdin, because why wouldn’t I be, and I turned it on right around when the genie was going over his rules: 1) can’t kill anyone (illegal), 2) can’t wish for more wishes (greedy!) and finally 3) he can’t make anyone fall in love with anyone else.

I remember watching this movie incessantly when I was around 13-14 and being pissed off about rule #3, of course because I was a lovesick teenager and when my friends and I made lists of the guys we had crushes on mine was like 20 long. And none of them liked me back so I just pined after them wishing there was just SOME way to MAKE them like me back and then Robin Williams as the Genie swoops in and shits all over it.

Of course NOW it makes sense and was kind of the theme of the whole movie – don’t tell me who to love and/or marry and maybe I’ll do a better job of making sure you don’t get brainwashed by a dude who looks like the walking dead.

It’s an interesting lesson from Disney and a huge improvement from their lessons of the 30’s – you need a man to save you after you’re poisoned fending off a jealous stepmother and being an indentured servant to diamond miners. Yes in case you were wondering, Snow White was the first Disney movie and came out in 1937.

Here are some other valuable life lessons from Disney:

Alice in Wonderland (1951) – Clearly the result of someone doing too much acid.

Peter Pan (1953) – Guys never want to grow up and will always ditch you for a younger ho.

Mary Poppins (1964) – Never forget your umbrella if you live in London.

The Little Mermaid (1989) – Before you ditch your family for a dude, make sure he’d at least be willing to save you from a giant octopus.

The Rescuers Down Under (1990) – Australian accents are awesome